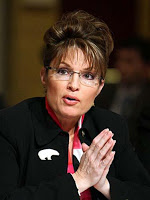 Sarah Palin’s church has endorsed an “ex-gay” conference to take place in Anchorage this weekend and PFLAG plans to be there to protest and to demand that Palin reject the “ex-gay” movement.

Parents, Families and Friends of Lesbians and Gays (PFLAG) today condemned a so-called “ex-gay” conference scheduled for Saturday in Anchorage. Love Won Out, which claims to “cure” lesbian and gay people through prayer and spiritual guidance, has been cited as a harmful practice with long-term consequences for lesbian, gay, bisexual and transgender (LGBT) youth who are often forced to attend, against their will, by parents struggling to deal with a child’s sexual orientation. PFLAG families and supporters will gather outside the conference on Saturday to offer support for youth attending and information for parents and families.

“Families never win at Love Won Out,” said Jane Schlittler, president of PFLAG’s Anchorage, Alaska chapter. “The conference’s organizers maliciously target often well-meaning parents who are dealing with a difficult issue in their lives, and in the process put their kids’ well-being at risk. Make no mistake: There is far more ‘preying’ than ‘praying’ taking place at these meetings, and far more harming than healing in the doctrine of Love Won Out.”

In a statement, PFLAG noted that, “It is unfair, at this point, to assume that Governor Palin endorses so-called ‘ex-gay’ therapy like that espoused by Love Won Out,” but that “Saturday’s event in Anchorage provides an important opportunity for the first GOP mom on the party’s presidential ticket to make clear that she, as a mother and a public servant, will not condone, either explicitly or implicitly, such attempts at dividing our families and hurting our kids.”

“Palin, and lawmakers of both parties, should seize that opportunity,” the group said, “and stand up as boldly and outspokenly for all of our kids as much as they do for their own.”

Palin’s church and its ilk want to brainwash us in the blood of Jeebus. They want to turn every one of us into tongue-speaking, snake-handling, I-saw-Jeebus-in-my-taco, Christer copies of themselves.

It continues to blow my mind how any self-respecting gay person can continue to so stridently support the people who work every day towards their demise (and we’ve got plenty of them here on JMG). “My life is not my sexuality. I am not a one-issue voter.” Blows. My. Fucking. Mind.

Previous Michelle Obama On Ellen
Next Billie Jean King: Not So Fast On My Palin Comment