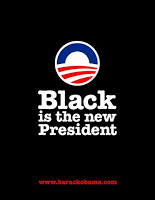 Barack Obama’s speech in Coral Gables, Florida today was interrupted by a group of black protesters calling themselves “Blacks Against Obama.” The protesters waved signs claiming that he has been endorsed by the KKK.

The signs said Obama was for gay marriage and abortion, and said his candidacy was “endorsed by the KKK.” Another sign said, “Jesse Jackson hates Obama.” Obama originally said the protesters could stay inside the event, but they were escorted out when they would not stop shouting. Perhaps the protesters are confusing the KKK with the Florida-based white power groups which have claimed that Obama’s candidacy has caused their membership to swell.

This post is as good as any to show you an example of the pro-Obama artwork that can be found on Design For Obama. Cool stuff.