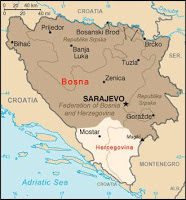 Bosnian Muslims are demanding that this month’s first-ever gay pride events be canceled because they occur during Ramadan.

Opposition to gay pride has been fueled by the Islamic magazine Saff. Columnist Ezher Beganovic has called for the government to cancel the festival. Calling the four day event a “festival of homosexuality” that is an affront to Islam, Beganovic warned in a column that if pride went ahead it would prompt an angry reaction from believers.

Pride organizers say they did not intend to offend Muslims, but that the date was set a year ago. “It coincided with Ramadan unintentionally,” Q Association leader Svetlana Djurkovic told the Reuters news service. “This is the festival of arts and culture and there are many believers in our population as well,” said Djurkovic. She added that conservative Muslims would have been offended no matter when the festival was held.

Throughout the countries of the former Yugoslavia LGBT people have few rights and discrimination is rampant. Slovenia is the only republic that has a registry for same-sex couples, although it provides few benefits.

Hatred of Bosnian gays has created odd bedfellows as the local Muslim majority is joined by Orthodox Christians and Roman Catholics in decrying “unnatural, sick and deviant behavior.” The one thing these religions can agree on is how they’d all like us dead. Remember when Sarajevo was touted as an oasis of multi-culti hipness?