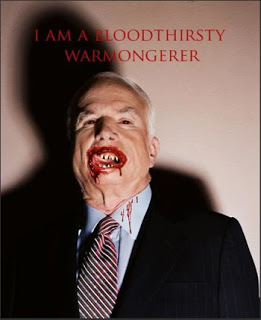 The Atlantic hired photographer Jill Greenberg to shoot the current John McCain cover. Greenberg did the shoot, handed a very nice picture over to the Atlantic, then went home and photoshopped the fuck out of the outtakes for her personal site. The Atlantic is duly embarrassed. The right wing is outraged. The rest of world is highly amused, but you can bet Greenberg won’t work again soon.

The Atlantic said Greenberg “disgraced herself” and that it assumed she would act more professionally. The writer of the cover story called it “juvenile.”

Greenberg, meanwhile, told PDNPulse it was “irresponsible” of the Atlantic to hire her in the first place for “heroic” shots of McCain, given her well-known anti-Bush photography. And she gloated over how she tricked McCain:

Greenberg asked McCain to “please come over here” for one more set-up before the 15-minute shoot was over. There, she had a beauty dish with a modeling light set up. “That’s what he thought he was being lit by,” Greenberg says. “But that wasn’t firing.”

What was firing was a strobe positioned below him, which cast the horror movie shadows across his face and on the wall right behind him. “He had no idea he was being lit from below,” Greenberg says. And his handlers didn’t seem to notice it either. “I guess they’re not very sophisticated,” she adds.

Check out the other images here.