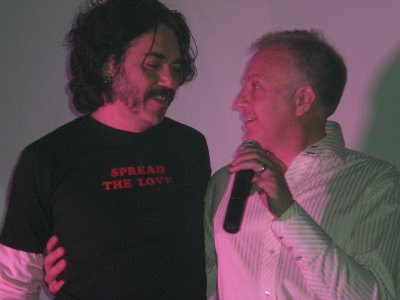 Two more of my friends have made it official. Former National Gay & Lesbian Task Force executive director Matt Foreman has married his partner Frank De Leon in San Francisco. The couple has been together for 18 years. From the New York Times:

Mr. De León, 46, is the owner and president of FADesign, a graphic design firm in New York. He graduated from the University of Houston. He is a son of Josefina De León and Francisco A. De León of Houston.

Mr. Foreman, 53, is the director of gay and immigrant rights programs at the Evelyn & Walter Haas Jr. Fund in San Francisco. From 2003 to 2008, he worked in New York as the executive director of the National Gay and Lesbian Task Force, and from 1997 to 2003, he served as the executive director of Empire State Pride Agenda, also in New York. He graduated from West Virginia Wesleyan College and received a law degree from New York University. He is the son of Virginia A. Foreman and James H. Foreman of Ten Sleep, Wyo.

Officiated by Shannon Minter, the legal director for the National Center for Lesbian Rights, the ceremony took place on Saturday at San Francisco’s Clarke Mansion with both grooms’ parents in attendance. Matt and Frank are honeymooning in Mykonos. [Note: I took the above photo earlier this year at Matt’s going away party here in NYC. When he and Frank get back from Greece, I’ll see if I can get a shot of the wedding.]