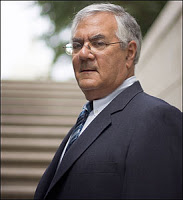 “All of a sudden, now that we’re on the verge of making a deal, John McCain drops himself in to make a deal. I really worry about this politicization of it. Frankly, we’re going to have to interrupt a negotiating session tomorrow between the Democrats and Republicans on a bill, where I think we’re getting pretty close, and troop down to the White House for their photo-op, and then come back and get on to it. We’re trying to rescue the economy, not the McCain campaign.” – Rep. Barney Frank (D-MA), complaining about John McCain’s theatrics.