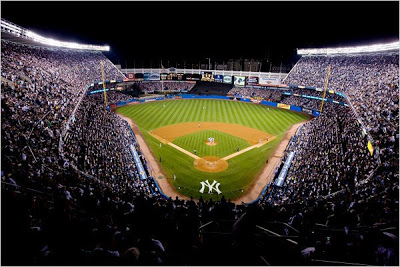 Yesterday the final game was played at Yankee Stadium, the most venerated sports venue in American history.

It will only grow with time, like Lou Gehrig’s farewell, Don Larsen’s masterpiece and Reggie Jackson’s third home run in a World Series game. Untold thousands will say they were there the night the curtain fell on baseball’s grandest stage.

It happened Sunday night in the Bronx, when Yankee Stadium hosted a baseball game for the last time. It went out the way it opened, with a victory, this one by 7-3 over the Baltimore Orioles. Babe Ruth hit the first home run, in 1923, and José Molina hit the last, a two-run shot to left that broke a tie in the fourth inning.

Tickets for yesterday’s game went as high as $3500 for seats behind the home dugout. The stadium will be dismantled and many parts (seats, signage, banners) will be sold on eBay. The final game at the Mets’ Shea Stadium will be this weekend and that stadium will be disposed of similarly. Both teams have nearly-completed brand new stadiums waiting in former parking lots next door.