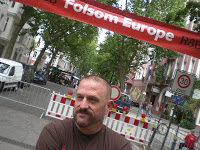 It took a few days to get my photos off of Aaron’s laptop, but I’ve finally posted a gallery of some of my pics from Berlin and Folsom Europe. There’s a small slideshow at the bottom of this post, but since a few of the pics are NSFW, you’ll probably want to view the full-screen versions on your home machine. (Hence this weekend posting.) Click on the “slideshow” button at the above link for full embiggening and captions.

Below are a couple of shots of the fair. As you can see, it was a comparatively civilized event, held on a lovely tree-shaded street flanked by dozens of tables with umbrellas. Complete nudity and public sex was forbidden, unlike at San Francisco’s Folsom. Which was a good thing, because also unlike SF (and NYC), the fair takes place in the middle of a quite nice residential area. We noticed a number of bemused locals weaving their way through the crowds carrying laundry and groceries, but they and their kids saw nothing more notable than the occasional bare ass in chaps. Wait, I guess the guys in full-body rubber suits and gas masks were probably somewhat more memorable. Saturday night we attended the charmingly named PiG Party, the official dance, which was held at a massive old factory way out in das boondocks of East Berlin. The cavernous space probably could have held two Roseland Ballrooms (site of the Saint Black Party), although I’m told attendance was about half of the Black Party. While it got very crowded, it was never felt uncomfortably so.

The place had no restrooms, so folks had to tramp into a field next door where several big trailers were parked. Not a big deal, really, except that the continuous light rain rendered the field into gelatinous grey muck very quickly. Some guys were not happy about ruining their “show” boots. The coat check was also outside, about a hundred feet past the trailers, so some of the nakeder guys arrived shivery and wet.

As tends to be the case these days, I wasn’t crazy about the music of DJ Jack Chang, who played a trancier take on typical circuit tribal without a single vocal for the 6.5 hours I was there. (You can download Chang’s set here.) Still, he did throw in a number of beautiful swirly dropouts, which I love, but are the bane of America’s teeth-grinding party boys. The sound was pretty good for such a big bare room – not overloud, but strong enough to rattle a harness on the dance floor. One nice bonus of such a large space – the temperature stayed a perfect 75 the entire time. On the downside, the ceiling (about 70-80 feet high) was made entirely of glass, so the morning light seemed to dampen spirits a bit by around 6am.

Peering over a rail into a basement space around 2am, I spied what I thought was the usual American-style party boy resuscitation food area – fruit, cookies, etc. But much later in the party I wandered down to find it was a full restaurant, including a crepe station. A crepe station, at a leather dance. That still kills me.

I met a few JMG readers at the party, so “Hallo” to: Ken (the cute bearded cub from Milan), Jeffrey (the hilarious Brit), Alex from Moscow, Brantt from Berlin, Henri from Paris, and the big bear thruple from San Francisco. Below is a one-minute clip of the view from the balcony, but I’m not sure it gives you an idea of just how big the space was. I’d definitely visit Folsom Europe again, including the PiG Party, only next time I’ll try to get out of Schoenburg (one of the gayborhoods) a bit more. Although we did get some sightseeing done, the bulk of our trip was kind of like visiting NYC for Pride and hardly leaving Christopher Street. Next time.