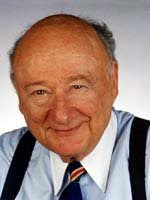 “If the vice president were ever called on to lead the country, there is no question in my mind that the experience and demonstrated judgment of Joe Biden is superior to that of Sarah Palin. Sarah Palin is a plucky, exciting candidate, but when her record is examined, she fails miserably with respect to her views on the domestic issues that are so important to the people of the U.S., and to me. Frankly, it would scare me if she were to succeed John McCain in the presidency.”

The still-closeted after all these years Koch campaigned in several states in support of Bush in 2004. He is offering to campaign for Obama if asked.