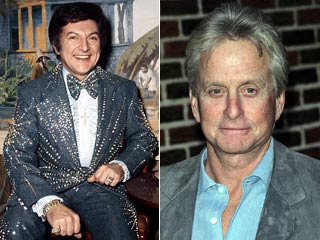 I don’t know how I missed last week’s news that director Steven Soderbergh is casting Michael Douglas to play Liberace in a biopic about the famously flamboyant Las Vegas showman.

Matt Damon is set to play Liberace’s lover who sued him for palimony. Right up until his 1987 death from AIDS, Liberace denied his gayness. (The magazines were always depicting him as dating one starlet or another and a lot of people bought it somehow.)

I remember watching Liberace on Merv Griffin in the ’70s and thinking, “What is this nonsense?” But today I’d be quite amused and therefore am rather interested to see Douglas’ portrayal, even though I’m sure the movie will be somewhat dark.

TRIVIA 1: Liberace played the “evil pianist” villain Chandell on Batman. His episodes were the highest rated of the series.

TRIVIA 2: In a letter to a critic who derided his ostentatious style, he coined the now-famous phrase, “I cried all the way to the bank.”