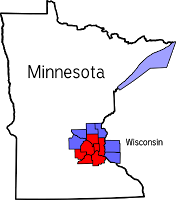 They Can Always Ask Larry Craig The Virginia delegation to the Republican Convention has canceled their order of a guide to the Twin Cities because it includes, GASP, a listing of local gay bars.

The campaign for Virginia’s Lt. Governor Bill Bolling ordered 150 of the guides to give to Virginia delegates as gifts when they arrived in the Twin Cities. But after reviewing the guide and finding it had a six-page section for gays and lesbians, they canceled their order, said AJ Kiefer, The Rake’s advertising director. Kiefer said The Rake agreed to refund the campaign’s money.

According to some bloggers, postings on the M4M section of Craigslist exploded by 80% during the Democrat convention. Wanna bet it triples or more for the Republicans?