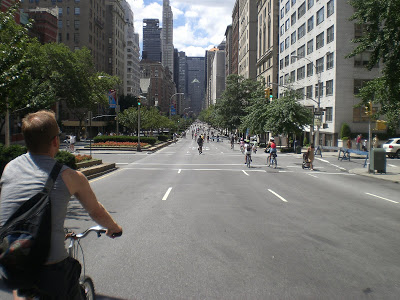 Yesterday was the first of three consecutive Saturdays in Manhattan’s new Summer Streets program in which roads are closed to cars in a route from the Brooklyn Bridge up to Park Avenue at 72nd Street. It was like Critical Mass, only without the assholes. (Above: Farmboy C at Park & 60th.)

The Farmboyz and I turned the day into one of our epic day-long bike rides, starting up by my place on the UES, then down the ghostly and beautifully empty Park Avenue, where we were allowed the unprecedented pleasure of biking the Helmsley tunnel and the ramps around Grand Central (above) and then into the Murray Hill Tunnel (below). Way cool.

Next stop was down in the Bowery at our favorite brunch place, Great Jones. After that we headed into the Village to search for Log Cabin Republicans at their supposed street fair, where we found nuttin’ but the usual tube socks, pashminas, and counterfeit sunglasses. Not one Cabinette in sight. We rewarded ourselves for enduring the fair by taking a break at the gay beach on the Christopher Street Pier (above) where the Farmboyz had an uncomfortable looking nap in the shade (below).

Next we headed up the Hudson River Park and toured most of the piers along the way. At Pier 64 we discovered a funky two-tiered open air pub (below), but it was pretty much frat boy central, so we didn’t stay for a drink. Across from the new Chinese Consulate at 44th Street we ran into the usual Tibetan protesters (below), ten of whom were arrested there on Friday.

After a couple of frozen drinks at a pal’s new place in Midtown, we detoured into Lincoln Center where we ran into a free concert by Dulsori, the Korean “wild beat” percussion group. Delightfully strange. About nine hours door-to-door, it was pretty much the perfect Manhattan day. Along the route, we were interviewed by a TV crew documenting Summer Streets, where we offered our thanks to Mayor Bloomberg for the event. Summer Streets continues its trial run over the next two Saturdays. Check it out yourselves and maybe we can get this thing turned into a Saturday standard.