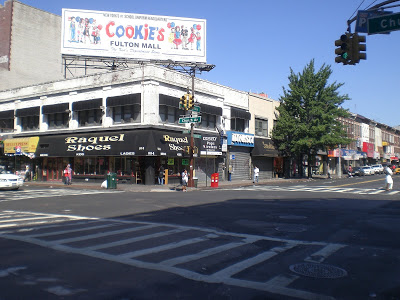 The things I do for you people, getting up at the asscrack of the Lord’s Day to trek out to Brooklyn’s Crown Heights for the much-hyped Straight Pride Parade. As you can see, however, I found the corner of Flatbush and Church, the parade’s supposed 10am starting point, completely deserted. Damn, and here I wanted a Straight Pride t-shirt.

I did see a good number of cars whizzing by that were festooned with flags from Jamaica and other Caribbean nations, but those were probably just folks getting ready for tomorrow’s massive West Indian Day Parade. Just to make sure I hadn’t missed the fun, I popped into a few shops to inquire if anybody had seen a parade this morning. The manager of Raquel Shoes told me, “I’ve been here since 8:30am. It’s been totally quiet all morning.” Curious, considering this dumbass press release I got two weeks ago:

With the straight pride parade in New York City only two weeks away, Reggae continues to defend itself against the recent boycotts of the music. The main purpose of the parade is to get rid of some of the negative stereotypes that, according to the TCOOO label, has been attributed to not only the Reggae community, but to Jamaica and Jamaicans in general.

Some Reggae artists believe that reggae music has been unfairly targeted. Stapler from the TCOOO label and the artist behind “Hit them hard,” the song at the root of the straight pride parade, believes the gay community targets Reggae because 99 percent of the artists are African American. “Eminem dissed them and they protested a little, then Eminem performed on stage with Elton John and all was forgiven,” said Stapler. “Beenie man went on the Ru-Paul show so why are gays still bent on destroying Reggae music?”

Massicker from the TCOOO label took it a step further, saying, “Look at the Reggae artists that they target. They go after Buju Banton and Sizzla, but they don’t bother a Sean Paul or a Damian Marley. When Damian Marley said, ‘Funny man get drop like a bad habit,’ what do they think a funnyman is? A funnyman is a homosexual, so are they afraid to challenge a Marley, or is he not Black enough for the homosexual community to try and destroy?”

The press release directs you the website of TCOOO, the organizing reggae label, but there’s no mention of the parade there today. Nothing on their MySpace page either. I at least expected to find a couple of reporters lurking around, but the only folks on the street seemed to be morning shoppers. Most of the shops were just opening, with employees placing speakers outside their doors to pump out reggae, soca, and calypso. That got me jonesing for some jerk chicken or goat stew, but it was too early so I had to settle for a delicious pastry from Ken’s Jamaican Bakery.

Who knows, maybe I blinked and missed a handful of haters marching up Church Avenue wearing Buju Banton t-shirts. What a laughable non-event. And that, my tender kittens, is a very good thing.