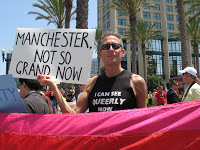 As LGBT and labor groups continue their boycott of Doug Manchester’s hotel properties in San Diego, the CFO of the company has warned executives that the losses may be in the millions. Several large groups have canceled conventions at the hotel since the boycott launched.

Officials at the Manchester Financial Group have argued for weeks that a boycott by gay rights and union groups hasn’t hurt business at its two San Diego hotels, the Manchester Grand Hyatt and The Grand Del Mar. But a top company official, in an e-mail obtained by The San Diego Union-Tribune, painted a different picture, saying the boycott could have dire consequences for hotel owner Doug Manchester that could cost him millions of dollars in lost business.

In a July 29 e-mail to Manchester, Paul Wilkins, chief financial officer for the group, said he believed “this boycott effort will cost you millions of dollars of lost revenue and possibly tens of millions of dollars in lost value for both the Manchester Grand Hyatt and The Grand Del Mar.”

Wilkins, who did not return several phone calls seeking comment, also warned about the dangers of alienating the gay community, which he called a “large and very affluent market segment.” Further, he said The Grand Del Mar “is still struggling financially” 10 months after opening and the “absolute last thing The Grand needs right now is a boycott.”

Wilkins warned that the boycott could extend to the entire Hyatt chain, earning the San Diego franchise the wrath of the parent company. The boycott was launched when it was learned that franchise owner Doug Manchester had donated $125K to organizers of the anti-gay marriage referendum.

At the NLGJA convention in DC last weekend, I met Fred Karger of Californians Against Hate, a pro-gay marriage group that organized in response to Doug Manchester’s donation. Go to their site for the latest updates on the boycott and for news on the status of Proposition 8.