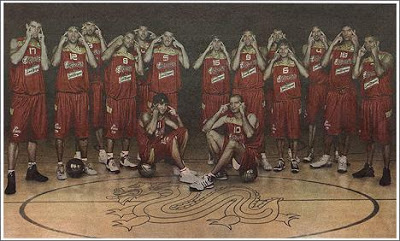 Spain’s Olympic basketball teams have risked upsetting their Chinese hosts by posing for a pre-Games advert making slit-eyed gestures. The advert for a courier company, which is an official sponsor of the Spanish Basketball Federation, occupied a full page in the sports daily Marca, the country’s best-selling newspaper.

The advert features two large photographs, one of the men’s basketball team, above, and one of the women’s team. Both squads pose in full Olympic kit on a basketball court decorated with a picture of a Chinese dragon. Every single player appears pulling back the skin on either side of their eyes. The advert carries the symbol of the sport’s governing body.

Playing for Spain is Los Angeles Lakers star player Pau Gasol. No apologies yet from anybody involved, but you can bet that Gasol will be in a world of shit when he gets back to LA. Where they happen to have just a few Asians.

Previous Enough With The Floor Mics, Already
Next The Master Of Gay Divorce