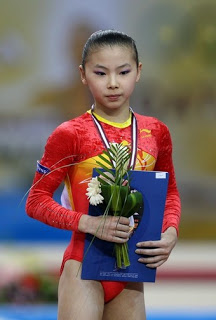 Chinese gold medals won in women’s gymnastics are coming under question as proof has emerged that star competitor He Kexin is only 14 years old. In 1997 the minimum age for competing was raised to 16.

Just nine months before the Beijing Olympics, the Chinese government’s news agency, Xinhua, reported that gymnast He Kexin was 13, which would have made her ineligible to be on the team that won a gold medal this week.

In its report Nov. 3, Xinhua identified He as one of “10 big new stars” who made a splash at China’s Cities Games. It gave her age as 13 and reported that she beat Yang Yilin on the uneven bars at those games. In the final, “this little girl” pulled off a difficult release move on the bars known as the Li Na, named for another Chinese gymnast, Xinhua said in the report, which appeared on one of its Web sites, www.hb.xinhuanet.com

The Associated Press found the Xinhua report on the site Thursday morning and saved a copy of the page. Later that afternoon, the Web site was still working but the page was no longer accessible. Sports editors at the state-run news agency would not comment for publication.

If the age reported by Xinhua was correct, that would have meant He was too young to be on the Chinese team that beat the United States on Wednesday and clinched China’s first women’s team Olympic gold in gymnastics. He is also a favorite for gold in Monday’s uneven bars final.Yang was also on Wednesday’s winning team. Questions have also been raised about her age and that of a third team member, Jiang Yuyuan.

Go to Huffington Post for an exhaustive listing of documentation proving the cheating.