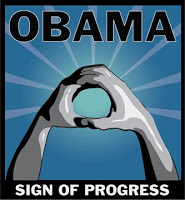 Oy vey. Some designer named Rick Husong is trying to promote an Obama “hand-signal”, which he wants to turn into the “peace sign of our generation.”

George Bush had his three-fingered W salute that supporters flashed when greeting him at presidential campaign events in 2000. And now, if a Los Angeles creative agency gets its way, Sen. Barack Obama will see fans meet him with his own salute like the one above. “Our goal is to see a crowd of 75,000 people at Obama’s nomination speech holding their hands above their heads, fingers laced together in support of a new direction for this country, a renewed hope, and acceptance of responsibility for our future,” says Rick Husong, owner of The Loyalty Inc. Husong tells me that he got the idea after seeing the famous Obama-Progress poster by artist Shepherd Fairey.

Fortunately, a lot of people have some good sense about this double-dumbass idea.

Among the hundreds of comments posted on the Whispers site were those comparing it to a gang gesture, a Nazi salute, or worse. “This is how Sieg Heil got started. And, no I’m not saying Obama is Hitler. I just think people should be careful about slipping into a personality cult for a charismatic leader,” wrote Jake of Tennessee.

Husong isn’t bothered by naysayers and says that his site has had over 200K hits with the above artwork downloaded 7700 times. Which was probably all right-wingers tickled by the “asshole” imagery.