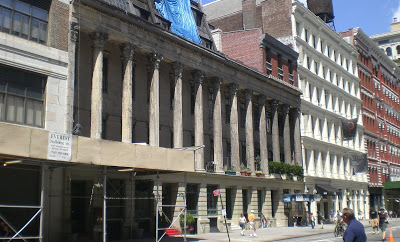 Colonnade Row was built on Lafayette Street just south of Astor Place in the 1830’s. Four of the original nine Greek Revival townhouses remain on the land originally owned by John Jacob Astor, who lived in one of the houses for a time, as did Washington Irving, President John Tyler, and Cornelius Vanderbilt. The houses fell into disrepair in the 1860’s when Murray Hill became the hip part of town for Manhattan’s elite. Each of the original houses of Colonnade Row had 26 rooms, but they’ve all been subdivided into rundown apartments and offices. A sad fate for landmarked former homes of the likes of Astor and Vanderbilt.

Previous Catholic League: Ban Towleroad From DNC
Next Knights Of Columbus Give $1M To Prop 8