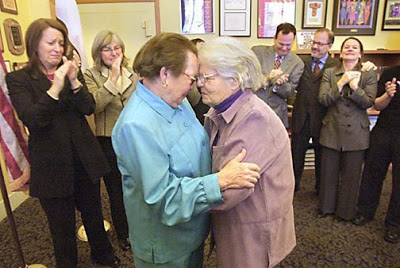 Del Martin (at right above in a photo from 2004) has died at age 87 in San Francisco. Phyllis Lyon, her wife of 55 years, was by her side. The co-founder of the world’s first lesbian rights organization and with Lyon the first gay person to legally marry in California, Del Martin lived a long, proud, beautiful life of service to LGBT people worldwide.

Via the National Center For Lesbian Rights:

Martin was one of the nation’s first and most visible lesbian rights activists who dedicated her life to combating homophobia, sexism, violence, and racism. Martin’s many contributions to the LGBT movement will resonate for decades to come.

“Today the LGBT movement lost a real hero,” said Kate Kendell, Executive Director of the National Center for Lesbian Rights. “For all of Del’s life, she was an activist and organizer even before we knew what those terms meant. Her last act of public activism was her most personal—marrying the love of her life after 55 years. In the wake of losing her, we recognize with heightened clarity the most poignant and responsible way to honor her legacy is to preserve the right of marriage for same-sex couples, thereby providing the dignity and respect that Del and Phyllis’ love deserved.”

Del Martin never stopped fighting for you and for me and her legacy will live on in the hearts of LGBT people everywhere. It’s a sad day for all of us, but that sadness is tempered by Del Martin’s example that people on the side of good will, ultimately, triumph.