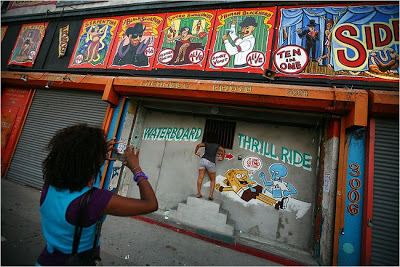 New on Coney Island’s boardwalk, the Waterboard Thrill Ride, where beach lovers can add torture to their mix of sun, surf, and sand.

If you climb up a few cinderblock steps to the small window, you can look through the bars at a scene meant to invoke a Guantánamo Bay interrogation. A lifesize figure in a dark sweatshirt, the hood drawn low over his face, leans over another figure in an orange jumpsuit, his face covered by a towel and his body strapped down on a tilted surface.

Feed a dollar into a slot, the lights go on, and Black Hood pours water up Orange Jumpsuit’s nose and mouth while Orange Jumpsuit convulses against his restraints for 15 seconds. O.K., kids, who wants more cotton candy!

The more you pay, the more the robot dude gets tortured. (Not unlike the nearby Shoot The Freak exhibit, except there you’re shooting a live freak.) The proprietors of Waterboard Thrill Ride originally wanted to waterboard actual customers, but decided there might be a teensy legal problem there. But the dummies don’t seem to provide much of a thrill.

Many people stroll by the installation without even stopping to look. As for those who do, Jodi Taylor, house manager for the freak show, said: “Adults find it very shocking, and kids are like, ‘That stinks.’ They’re so desensitized. They have no idea what the ethical issues are. They wish there was water spraying in their face.”

Last Monday a family of former New Yorkers now living in Israel climbed up the cinderblock steps and peered in the barred window. The first thing they saw in the darkened room was the orange-jumpsuited detainee — and Mr. Powers’s son, sitting atop him with a merry grin on his face. (His father was tinkering in the background.)

“I love it,” said Ricki Rosen, the mother of the family. “Hilarious!” Her daughter asked what it was all about, and Ms. Rosen responded: “Waterboarding, Sweetie, is a kind of torture where they pour water on people’s faces so they feel like they’re drowning. But then there was a big controversy because a lot of Americans are saying you shouldn’t torture people even if they are terrorists.” She paused. “The baby is hilarious!”

“The baby is hilarious.” Headdesk.