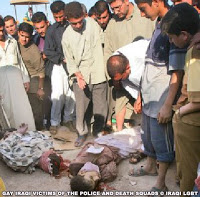 Under Saddam Hussein, gay life in Iraq existed relatively peacefully in a “Don’t Ask, Don’t Tell” sort of vein. Since the US invasion and the rise of sharia law, gays have been routinely rounded up, raped and murdered. Most gay men in Iraq now live hidden and terrified. Iraqi officials generally refuse to even discuss the situation and those that do say that gays are getting what’s coming to them.

Even relatively liberal people in Iraq seem to have harsh attitudes toward this subject. “These people are not welcome in the society because they are against the social, natural and religious rules,” said one well-educated Iraqi who did not want to be identified more closely. A Baghdad executive said religion and tradition have made the overwhelming majority of Iraqis hostile to homosexuals. “Nobody is interested in talking about this at all,” he says with a grim chuckle. A handful of gay men told NEWSWEEK harrowing stories about being cast out of their homes or savagely attacked by the storm troopers of virtue: Shia extremists among Badr Corps operatives (many of whom are now in the Iraqi Security Forces) or groups like the Mahdi Army, and sometimes both. But when told of such atrocities one Iraqi acquaintance blamed the victims, calling them “the lowest humans.”

Persecution of gays will stop only if Iraqis can abandon centuries-old prejudices. They would have to acknowledge that human rights don’t cover only the humans they like. Insisting that gays are just a few undesirable perverts who “should be killed”–as one Iraqi who works in journalism put it–encourages an atmosphere of impunity no matter the offense. Killing gays becomes “honorable.” And raping them is OK because it isn’t considered a homosexual act–only being penetrated or providing oral sex is.

A small underground network of safe houses helps to shield Iraqi gays from violence. The UK-based organization Iraqi LGBT raises money for this operation and works to help gays with asylum claims if they are able to flee the country. The group has a PayPal page set up to accept donations.