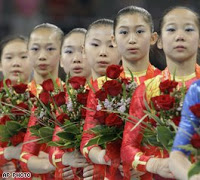 The International Olympic Committee is finally looking into the ages of the Chinese female gymnasts.

The IOC did not give details on what new information prompted it to act now, three days after the gymnastics competition ended. “With some questions still remaining, we asked the federation to take a closer look,” Davies said.

The Chinese women won six medals, including the team gold and He’s gold on uneven bars. Media reports include a Nov. 3 story by the Chinese government’s news agency, Xinhua, that suggest He is only 14. Asked earlier this week about her age again after winning the uneven bars title, beating American Nastia Liukin in a tiebreak, she said:

“We played fair at this Olympic Games,” Liukin’s father and coach, Valeri, said after they arrived back in the United States. “… If somebody cheated, shame on them.”

A Chinese bronze medalist admitted recently that she was only 14 at the Sydney games, thereby cheating the rightful winner of her medal.

Previous POLL: Keep Religion Out Of Politics
Next Reciprocity For EU Civil Partners?