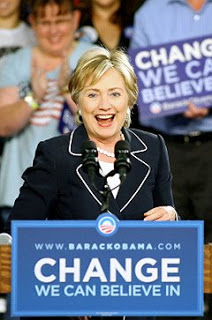 Gossipers at the Daily News have leaked word of Hillary’s recent visit to a Manhattan plastic surgeon to have dermafillers injected into her face.

Has Hillary Clinton added volume and smoothness to her skin? A source tells us Clinton visited a New York plastic surgeon early this month and received injections of a “dermafiller” in her face. The senator had appeared tired and wrinkly on a June 23 New York mag cover, but when she made her first solo campaign stop beside Barack Obama in Nevada on Aug. 8, she looked refreshed. After seeing a recent photo of Hillary, Dr. Tahl Humes of Vitahl Medical told us, “It appears that she has restored a youthful look with a combination of injectables.”

I was noticing the same thing during a television bit over the weekend. There’s a fascinating story at New York Magazine about the trend away from face-tightening surgery and towards plumping via injectables. Both can look creepy, but at least the injectables aren’t permanent, are they?