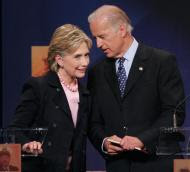 Hillary Clinton is expected to formally release her delegates to Barack Obama on Wednesday.

Sen. Hillary Rodham Clinton, hoping to unite the Democratic Party and cement her future in it, will gather her hard-won primary delegates Wednesday at a reception where she is expected to formally release them to Barack Obama.

The New York senator has invited her pledged delegates to a reception at the Colorado Convention Center, not far from the main Democratic National Convention arena.

The high-profile gathering of political regulars who once fought against Obama serves a dual purpose for Clinton: Show fellow Democrats that she can be a team player, and display her still-formidable political strengths for the future. Many of her supporters want her to run for president again.

A Democratic official told The Associated Press Sunday, a day before the convention begins, that she is expected to release her delegates at the Wednesday event. The official spoke on condition of anonymity because the person was not authorized to discuss details publicly.

Asked about Clinton’s plans for the event, her spokesman Philippe Reines said it will be “an opportunity for Senator Clinton to see her delegates — many for the first time since the primaries ended, thank them for their hard work and support, and most importantly to encourage them to support and work for Senator Obama as strongly as she has in order to elect him in November.”

Some Clinton delegates say they plan to vote for her nomination anyway. McCain is trying to capitalize on the fissures in the Democratic party.

Daniel Kagan, a Clinton delegate from Colorado, said, “I was sent to Denver to vote for Clinton. I would be letting my voters down if I voted for anyone else.” Kagan said he plans to vote for Obama in November, but he won’t be volunteering for the campaign. “I’ll get behind it (the ticket) weakly,” Kagan said.

Republicans are already trying to take advantage of such potential fissures. John McCain’s campaign launched a television ad suggesting rival Barack Obama snubbed Clinton because of her criticism during the Democratic primary fight. The ad features clips of Clinton, including one in which she accused him of negative campaigning, and a voiceover announcer says: “She won millions of votes but isn’t on the ticket. Why? For speaking the truth.”

According to CNN this morning, half of the recent decline in Obama’s poll numbers are attributed to Clinton supporters who are angry that she was not chosen for the VP slot.