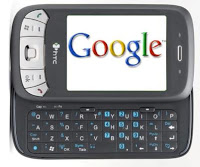 Yesterday the FCC approved Google’s application for their Dream phone, considered by some to be the first smartphone to seriously compete with the iPhone. Nobody seems to have seen an actual Dream yet, but the image shown here is thought to be close to what it will look like. A video of the prototype has been floating around YouTube since last November.

HTC’s Google handset is just over 5 inches long and 3 inches wide, with a keypad underneath the screen that either slides out or swivels out. The aim of the keypad is for easy e-mail, note-taking, and writing Web addresses. Internet navigational controls are situated below the screen on the handset. The handset will likely hit the market near the end of this year, the person said. The company officially remained mum on the handset. “We cannot comment on this product,” said Maggie Cheng, an HTC representative.

Sales are expected to commence in advance of the Christmas season. T-Mobile will be the exclusive carrier, at least at first.