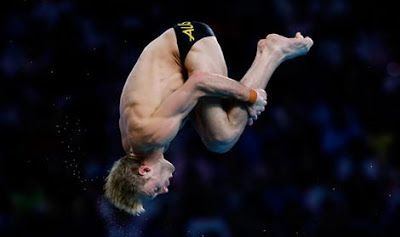 In what is being hailed as one of the most tremendous upsets of the Beijing Olympics, openly gay Australian diver Matthew Mitcham won a gold medal today after his string of perfect 10’s recorded the highest scoring dive in Olympic history.

Mitcham’s pulled off a stunning final dive in the 10 metre platform, scoring an incredible four perfect 10s, to steal the gold off favourite Chinese diver Luxin Zhou. Mitcham finished with 537.95 points. It was a massive upset defeating the premiere and form Chinese divers Liang Huo and Luxin Zhou in front fierce home crowd.

Mitcham, 20, battled depression, retired in his teenage years after physical and emotional burn-out, then just nine months later resumed his sport in 2007. Last night his triumphant return to the sport was crowned with gold. His coach Chava Sobrino, who encouraged Mitcham back into the sport, elatedly embraced diver and Mitcham broke down in tears.

It was late 2006 that Mitcham lost passion for diving and suffering depression he quit. During his hiatus from the sport last year to make money he plunged from a tower 14 metres high into a pool of water for crowds at the Royal Easter Show in Sydney. That job reignited his passion for the sport.

One person who has been by his side for the entire tumultuous and now brilliant journey is his partner, Lachlan, he was in the crowd last night courtesy of a Johnson & Johnson Olympic sponsorship. Mitcham is one of only a few “out” gay athletes in Beijing and the first Australian to openly declare his homosexuality going into an Olympics.

UPDATE: Here’s a clip of Mitcham being interviewed with his mother after his win as his boyfriend stands next him. Very nice to see the two boys hugging each other in front of the international sports press.