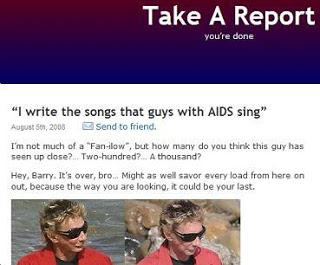 Michael McCarthy, a vice president at Citigroup, was fired last week because the company took issue with his popular blog, Take A Report, which often features homophobic and sexist commentary. McCarthy had been blogging from his office.

To the community of 60,000 who keep his company each day, Michael J. McCarthy looms large enough to be chosen as next month’s featured speaker at the Dallas Security Traders annual convention. That helps explain why Citigroup Inc fired him. The 35-year-old stock trader was let go earlier this week after his employers realized he was “Large,” the man of bulk who operates www.takeareport.com, Bloomberg News reported. The McCarthy Website showcases women who manage to look insufficiently dressed along with bawdy commentary on celebrities.

“This employee was terminated for behavior that violated the firm’s code of conduct and policies,” Citigroup spokeswoman Danielle Romero-Apsilos said. McCarthy, a vice president, declined to comment on his departure from the New York-based bank. Financial industry regulatory records show he’s been at Citigroup for seven years, most recently trading shares of utility and power companies.

“It’s a little over the top,” said Barry Ritholtz, director of equity research for New York-based Fusion IQ, who has looked at the site and has his own financial blog at www.bigpicture.typepad.com. “I can see why a conservative bank is not going to be happy with it. It’s funny as hell.”

The Website, created in April 2007, consists of commentary about homosexuals, excretory functions, concert reviews and college football picks. The name of the site refers to the Wall Street phrase, “take a report,” used on trading desks to confirm to a customer that an order had been executed.

McCarthy lost his job after Citigroup, the biggest United States bank by assets, determined that he was using his computer at work to access and promote the site, industry sources said yesterday. Takeareport.com raises money for a military unit in Iraq to provide it with better equipment.
It also donates proceeds to Wounded Warrior Project, a Florida-based non-profit group that helps injured soldiers, according to information on the site. It has 60,000 page views a day and 1.9 million page views a month, according to Google Inc’s Google Analytics unit which analyzes traffic for Websites.

“He never identifies himself,” Ritholtz said. “He never identified Citigroup. To me, it looks very much like a private thing.” For the Dallas Security Traders Association’s convention next month, McCarthy still is listed as the keynote speaker.