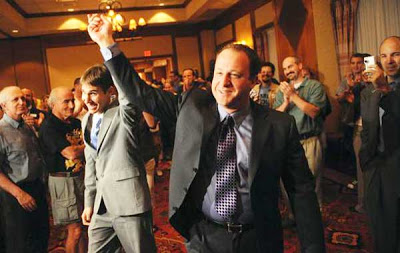 Barney Frank and Tammy Baldwin might be getting some company in Congress.

Entrepreneur Jared Polis, the first openly gay candidate for Congress from Colorado, won the 2nd Congressional District’s Democratic primary on Tuesday night. The race was defined by record- breaking campaign funding and vitriolic attacks in its waning days. “This election cycle, a lot of barriers are being broken,” Polis said. “At the congressional level, we are showing that people are willing to elect a candidate based on their values and ideas and not their sexual orientation.”

With 267 of 457 precincts reporting, Polis had 43 percent of the vote. Fitz-Gerald had 39 percent. Longtime conservationist Will Shafroth trailed with 19 percent. Polis is a favorite to succeed U.S. Rep. Mark Udall, because the seat is considered safe for Democrats. Udall is the Democratic candidate for U.S. Senate.

Cold, hard cash has been a hot topic in the race since Polis, an Internet millionaire, tapped his personal wealth to fund his campaign. At $5.3 million at last count, Polis easily demolished previous Colorado records for self-funding a race. Furthermore, Polis, Shafroth and Fitz-Gerald each topped $1 million in outside contributions, making the three-way race the most expensive primary in the nation.

Polis is the founder of online greeting card company BlueMountain.com, which he sold to Excite in 1999 for $910M.