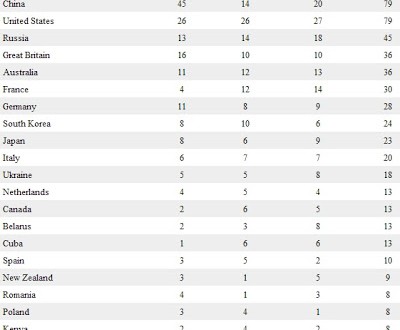 For the first time since 1936, the total Olympic medal count winner may not be the United States or Russia. From the Dallas Morning News:

The last time the U.S. failed to win the overall medal count was 1992, when the Unified Team earned 112 to America’s 108. That also was the last year in which the U.S. lost the gold medal race, 45-37 to the Unified Team.

As recently as the 1988 Olympics in Seoul, China won only five gold medals. But four years ago in Athens the Chinese finished second in the gold count with 32, four fewer than the U.S.

Now the Chinese have all but clinched the gold-medal race, and they have a chance to become the first nation other than the U.S. or Russia (which also has competed as the Soviet Union and the Unified Team) to win the overall medal count since Germany in 1936.