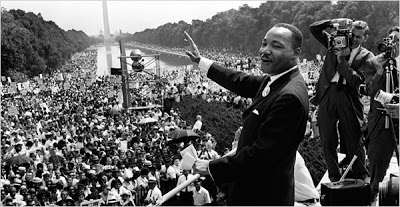 On the 45th anniversary of Martin Luther King’s I Have A Dream speech at the 1963 March On Washington, many are hoping that tonight Barack Obama can somehow recapture the excitement and optimism of that day.

Many veterans of the march will gather at televisions in their living rooms Thursday night, or sit with friends and old comrades and watch an event they would have considered impossible not just in 1963, but perhaps in 1983, or 1993. Theirs is often a cautious optimism; time has left them with a sense of the provisional nature of progress.

David R. Jones, now president of the Community Service Society in New York, recalled milling about in Washington in 1963, a 15-year-old there with classmates from a lefty school in Manhattan. Then Dr. King began to speak, and they fell quiet. “I never saw that kind of a speech,” Mr. Jones said. Some of you have written to ask that I make sure to mention today that the March On Washington would not have happened without Bayard Rustin, the openly gay advisor to MLK and the chief organizer of the march. In 1986, the year before he died, Rustin said, “The barometer of where one is on human rights questions is no longer the black community, it’s the gay community. Because it is the community which is most easily mistreated.” Tonight Barack Obama should honor Bayard Rustin and make a strong and unwavering statement of support for the LGBT community during what will surely be the most watched speech of his life. I have a dream.