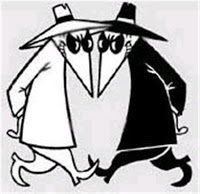 Britain’s MI-5 spy agency is looking for gay men to work as spies.

Until the early 1990s gays and lesbians were prevented from taking sensitive government jobs as it was believed that they would be vulnerable to blackmail. Since the 7/7 terrorist attacks in London, MI5 has expanded rapidly, with staff numbers predicted at 3,500 by the end of 2008.

MI5 are working towards diversifying their workforce by recruiting people from all backgrounds with a range of capabilities. The MI5 recruitment website states: “An in-depth knowledge and understanding of a variety of communities, cultures and languages isn’t just an advantage, it can be absolutely critical.

“At present, we are very keen to speak to people who speak: Arabic (all dialects, and particularly North African), Sorani, Bengali, Urdu with or without Gujarati, Punjabi, Chinese (Mandarin), Somali, Pushto, Persian and Russian. “We welcome all applications, but would be particularly interested to hear from women, individuals from ethnic minority groups and disabled people.”

Previous Over Hill And Highway The Banana Buggies Go, Comin’ On The Bring You….
Next McCain To Return Manhunt Money