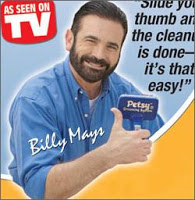 In the fall, Mays will start taping a TV reality show, “Pitchmen,” which will follow the creation of a two-minute commercial, from start to finish. But with many of his ads appearing 400 times a week, often at two minutes a pop, Mays could already be the single most ubiquitous figure on television today, measured purely in face time. His only competition comes from actors in perpetual syndication, like Seinfeld and Bart Simpson. “You would think there would be a saturation point,” says Scott Opfer, a director who has worked often with Mays. “But we never seem to reach it.”

Too much of a good thing? All that shouting! PS: Mays is hetero and married.