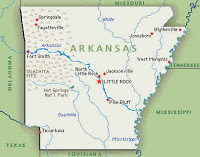 Christian activists in Arkansas have secured the required signatures to have a ban on gays adopting or fostering children put on the November ballot. The new law would also forbid straight unmarried couples from adopting.

Secretary of State Charlie Daniels certified the proposed initiated act for the Nov. 4 ballot after verifying that the Arkansas Family Council Action Committee had submitted 85,389 valid signatures of registered voters. Supporters needed to turn in at least 61,974 valid signatures.

The Family Council campaign is a response to a 2006 Arkansas Supreme Court decision striking down a state policy that specifically banned gays and lesbians from becoming foster parents.

The ballot measure would take the place of a state policy that currently bars unmarried couples living together from serving as foster parents. The measure faces the threat of a lawsuit from groups who say that it unfairly discriminates against unmarried couples and limits the number of foster and adoptive homes available for children.

The Arkansas Family Council is affiliated with James Dobson’s Focus On The Family. Gay rights activists are planning a lawsuit, saying they have found many fraudulent signatures on the petition and that the ballot amendment is unconstitutional.