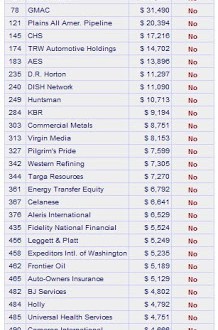 The Equality Forum reports that 471 of the nation’s 500 biggest companies now include sexual orientation in their employment discrimination protections. That number represents a massive improvement from 2003 when only 323 companies did so. Almost half of the remaining non-compliant companies are headquartered in Texas. Those companies are on the chart to the left, ranked by annual revenue. It should go without saying that the passage of ENDA would obviate lists such as this.