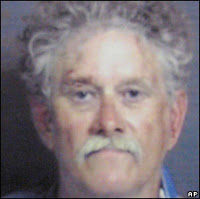 I’m sure those three’s chests are swelling with pride today. Seriously. I bet they each raced to check their Amazon rank.

Police say that according to Adkisson, his hatred was not directed towards Christianity or any other religion, but rather towards the social advocacy of the specific church he attacked. The Knoxville Unitarian Universalist Church has a sign on its lawn welcoming gays to service and hosts meetings for PFLAG. Two people were killed by Adkisson’s shotgun and five others remain hospitalized in grave condition.

And of course, the God-loving Freepers are blaming the Unitarian Church and saying that since the murdered congregants weren’t “true Christians”, they are now in hell.

– “What do you expect? God is NOT in the center of this church. Human beings are.”
– “It’s a “progressive” church. They probably had The Vagina Monologues scheduled for the evening service.”
– “It was probably a mini-rally for The Obamassiah and they were singing ‘The sun will come out tomorrow ….’. Now maybe, if there were a lesbian relationship between Annie and Mommy Warbucks or Annie got pregnant and had to get raise money for an abortion, that would be truly a part of the UU world view.”
– “An early report I saw indicated that the man who died may have been shielding the children. Just shielding someone from attack doesn’t gain you entrance into the Kingdom of Heaven. I hope the people in this “church” will use this wake-up-call as a way to get closer to the Lord Jesus Christ and reject their secular humanism.”