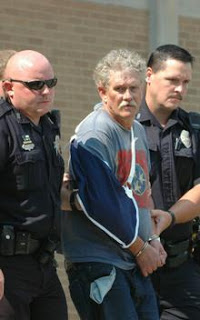 Days after the Tennessee Valley Unitarian Universalist Church in Knoxville put up a sign welcoming gays to worship, yesterday a gunman shouting “hateful words” killed two people and injured seven others during a youth performance of the musical Annie at the church. The gunman was tackled by congregants and eventually taken into police custody.

Jim D. Adkisson, 58, was charged with first-degree murder and was being held on $1 million bail, according to city spokesman Randy Kenner, who did not know if the suspect had retained an attorney. Authorities were searching Adkisson’s home in the Knoxville bedroom community of Powell, Kenner said.

The man slain was identified as Greg McKendry, 60, a longtime church member and usher. Church member Barbara Kemper told The Associated Press that McKendry “stood in the front of the gunman and took the blast to protect the rest of us.” Linda Kreager, 61, died at the University of Tennessee Medical Center a few hours after the shooting, Knoxville city spokesman Randall Kenner said. Five people remained hospitalized, all in critical or serious condition. Two others were treated and released.

The gunman’s motive is not yet known. The church, like many other Unitarian Universalist churches, promotes progressive social work, such as desegregation and fighting for the rights of women and gays. The Knoxville congregation has provided sanctuary for political refugees, fed the homeless and founded a chapter of the American Civil Liberties Union, according to its Web site.

Kemper said the gunman shouted before he opened fire. “It was hateful words. He was saying hateful things,” she said, but refused to elaborate. The FBI was assisting in the case in case it turns out be a hate crime, Police Chief Sterling Owen said. Police were taking statements from witnesses and collecting video cameras from church members who taped the performance. There were about 200 people watching a performance by 25 children based on the musical “Annie” when the shooting took place.

Tennessee LGBT newspaper Out & About notes that gunman was not a member of the church. I’ll have more on this story as it develops.

UPDATE: According to Knoxville police chief Stewart Owen, a letter found in the shooter’s car professed his hatred of liberals and gays.

Jim D. Adkisson, 58, of Powell wrote a four-page letter in which he stated his “hatred of the liberal movement,” Owen said. “Liberals in general, as well as gays.” Adkisson said he also was frustrated about not being able to obtain a job, Owen said.

The letter, recovered from Adkisson’s black 2004 Ford Escape, which was parked in the church’s parking lot at 2931 Kingston Pike, indicates he had been planning the shooting for about a week. “He fully expected to be killed by the responding police,” the police chief said.

Owen said Adkisson specifically targeted the church for its beliefs, rather than a particular member of the congregation. “It appears that church had received some publicity regarding its liberal stance,” the chief said. The church has a “gays welcome” sign and regularly runs announcements in the News Sentinel about meetings of the Parents, Friends and Family of Lesbians and Gays meetings at the church.

Previous Whoopi Kissed A Girl
Next Caption This