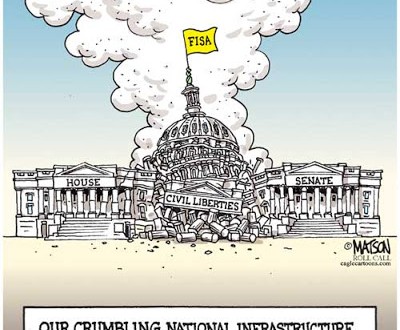 Thanks to today’s Senate vote to approve the Foreign Intelligence Surveillance Act, warrantless wiretapping, arguably the most intrusive violation of Americans’ right to privacy, will become legal. Oh, and everybody who’s already done it is now immunized against lawsuits. A list of how each Senator voted is here.

The Democratic-led Congress this afternoon voted to put an end to the NSA spying scandal, as the Senate approved a bill — approved last week by the House — to immunize lawbreaking telecoms, terminate all pending lawsuits against them, and vest whole new warrantless eavesdropping powers in the President. The vote in favor of the new FISA bill was 69-28. Barack Obama joined every Senate Republican (and every House Republican other than one) by voting in favor of it, while his now-vanquished primary rival, Sen. Hillary Clinton, voted against it. John McCain wasn’t present for any of the votes, but shared Obama’s support for the bill. The bill will now be sent to an extremely happy George Bush, who already announced that he enthusiastically supports it, and he will sign it into law very shortly.

Prior to final approval, the Senate, in the morning, rejected three separate amendments which would have improved the bill but which, the White House threatened, would have prompted a veto. With those amendments defeated, the Senate then passed the same bill passed last week by the House, which means it is that bill, in unchanged form, that will be signed into law — just as the Bush administration demanded.

Obama’s vote in favor of cloture, in particular, cemented the complete betrayal of the commitment he made back in October when seeking the Democratic nomination. Back then, Obama’s spokesman — in response to demands for a clear statement of Obama’s views on the spying controversy after he had previously given a vague and noncommittal statement — issued this emphatic vow:

To be clear: Barack will support a filibuster of any bill that includes retroactive immunity for telecommunications companies.

But the bill today does include retroactive immunity for telecommunications companies. Nonetheless, Obama voted for cloture on the bill — the exact opposition of supporting a filibuster — and then voted for the bill itself. A more complete abandonment of an unambiguous campaign promise is difficult of imagine.

The ACLU has come out swinging and vows to fight the bill:

Today, in a blatant assault upon civil liberties and the right to privacy, the Senate passed an unconstitutional domestic spying bill that violates the Fourth Amendment and eliminates any meaningful role for judicial oversight of government surveillance. The FISA Amendments Act of 2008 was approved by a vote of 69 to 28 and is expected to be signed into law by President Bush shortly. This bill essentially legalizes the president’s unlawful warrantless wiretapping program revealed in December 2005 by the New York Times.

“This fight is not over. We intend to challenge this bill as soon as President Bush signs it into law,” said Jameel Jaffer, Director of the ACLU National Security Project. “The bill allows the warrantless and dragnet surveillance of Americans’ international telephone and email communications. It plainly violates the Fourth Amendment.”