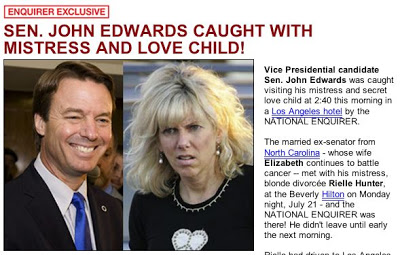 The National Enquirer is sticking to a story it posted last night which claims that NC Sen. John Edwards has been cheating on his ailing-from-cancer wife and has fathered a “love child” with documentarian Reille Hunter. According to the story, on Monday night Enquirer reporters caught Edwards sneaking in and out of Hunter’s hotel room in Los Angeles, causing the Senator to flee and hide in a bathroom for 15 minutes.

At 9:45 p.m. (PST) Monday, Edwards appeared at the hotel, and was dropped off at a side entrance. NATIONAL ENQUIRER reporter Alan Butterfield witnessed the ex-senator get out of a BMW driven by a male companion and stroll into the hotel.

Said Butterfield: “Edwards was not carrying anything. He walked in alone. He was wearing a blue dress shirt with the sleeves rolled up. He was looking around nervously before he entered the hotel.

“Once inside, he interestingly bypassed the lobby and ducked down a side stairs to go to the bottom floor to catch the elevator up – rather than taking the elevator in the main lobby. He went out of his way not to be seen.”

Meanwhile, Rielle had reserved rooms 246 and 252 under the name of the friend who had accompanied her from Santa Barbara, Bob McGovern. Rielle was in one room and McGovern was in another with her baby. This allowed her and Edwards to spend time alone, a source revealed.

Senior NATIONAL ENQUIRER Reporter Alexander Hitchen asked Edwards why he was visiting Rielle and whether he was ready to confirm that he was the father of her baby.

Shocked to see a reporter, and without saying anything, Edwards ran up the stairs leading from the hotel basement to the lobby. But, spotting a photographer, he doubled back into the basement. As he emerged from the stairwell, reporter Butterfield questioned him about his hookup with Rielle.

Edwards did not answer and then ran into a nearby restroom. He stayed inside for about 15 minutes, refusing to answer questions from the NATIONAL ENQUIRER about what he was doing in the hotel. A group of hotel security men eventually escorted him from the men’s room, while preventing the NATIONAL ENQUIRER reporters from following him out of the hotel.

While the story of this affair has been rumored for many months, if today’s revelations are true, it’s very disappointing. If it’s true, it will likely be devastating to Edward’s political career.

All the major gossip sites are on the story. Go check out Gawker, Drudge Report, ect.