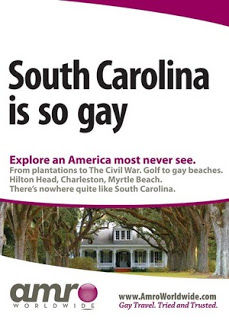 SC Says “No” To Gay Tourism A tourism agency booked South Carolina into a gay tourism campaign in the UK, but once state officials found out about it, they refused to pay for it.

After learning last week the state had agreed to spend tax money on the campaign — and spurred by a post on The Palmetto Scoop blog — the Department of Parks, Recreation and Tourism said Thursday it would not pay the tour operator.

Some lawmakers were shocked to learn about the campaign, with state Sen. David Thomas, R-Greenville, calling for an audit. Joel Sawyer, spokesman for Gov. Mark Sanford, said using tax money to support a social or political agenda is inappropriate. “Our state tourism dollars should be talking about the beaches and attractions of South Carolina,” Sawyer said. The campaign, which ends Saturday, planted posters all over a single London subway station. Prosser said the agency has asked the S.C. posters be removed.

The South Carolina tourism board is looking into disciplining the employee who signed off on the ad.