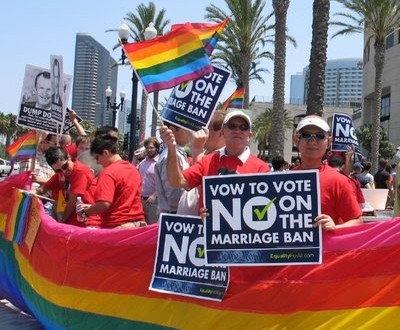 Rex Wockner has some great coverage of this weekend’s protest outside of the Manchester Grand Hyatt in San Diego. Last week a boycott of the hotel was announced by LGBT groups and a hotel employees union after the hotel’s owner, Doug Manchester, was revealed to have made a $125K donation to the campaign to overturn gay marriage. According to Wockner, about 200 protesters (including Gilbert Baker and Peter Tatchell) rallied outside the hotel as an anti-gay group counter-protested nearby.