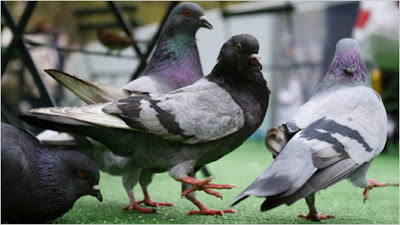 Wired has an idea on what to do about the worst scourge ever on American cities, the pigeon.

When you look at a pigeon, you might see a dirty, rat-like bird that fouls anything it touches with feathers or feces, but I see a waste-scavenging, protein-generating biomachine. At a time when rising demand for meat across the globe endangers the food system, and local eating has gained millions of (T-shirt wearing) adherents, it’s time to reconsider our assumptions about what protein sources are considered OK to eat.

You see, city pigeons are the feral descendants of birds that were domesticated by humans thousands of years ago so that we could eat them and use their guano as fertilizer, we read in Der Spiegel. They’re still doing their part, i.e. eating and breeding, but we humans have stopped doing ours, i.e. eating them.

Numbering in the hundreds of millions, they could be a new source of guilt-free protein for locavores in urban centers. Instead, we’re still trying to kill off our species’ former pet birds, which (as any city-dweller can attest) doesn’t work.

“Killing makes no sense at all,” Daniel Haag-Wackernagel, a biologist at the University of Basel, told Der Spiegel. “The birds have an enormous reproduction capacity and they’ll just come back. There is a linear relationship between the bird population and the amount of food available.” And in the developed world after World War II, there’s always been plenty of food.

“This explosion of the pigeon population is due to the large food supply, because after the war food became cheap in relation to income,” Haag-Wackernagel argues on his website. “Since this increase in our welfare, society has produced pigeon food in abundance through our wasteful practices.”

It sure sounds like a bad situation, but put the two quotes together in the context of food production. A food source that lives on our trash that is so reproductively prolific that we can’t kill it off? That’s green tech at its finest! Pigeons are direct waste-to-food converters, like edible protein weeds, that leave droppings that could be used as fertilizer as a bonus. And yet we expend energy trying to get rid of them.

The term squab now refers to the meat of the baby pigeon, but it can also mean pigeons in general, so we can simply extend the brand back to its historical proportions. In fact, some companies like Bokhari Squab Farms are already doing good business selling the stuff: A dozen of Bokhari’s live squab goes for $60. So, go buy sustainablesquab.com and encourage your urban friends to make omnivorism local. Just remind them: Pigeons are fowl.

I’d rather we unleash some horrible flesh-eating virus on them, but then it might spread to our cute rats. Seriously. Rats: better than pigeons. When was the last time a rat crapped all over your car?