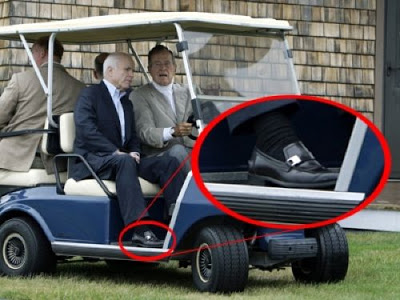 Remember how the right-wing eviscerated John Edwards for his $400 haircuts? John McCain wears $500 Ferragamos and lefty blogland is revenging itself into a tizzy. Nation blogger Christopher Hayes notes:

If I were a right-wing blogger, and I found out that Barack Obama was wearing Ferragamo loafers that cost $520, I would spend about 50% of my waking hours making sure everyone knew this. I would mock him for being an out-of-touch elitist and make jokes like, “If you think that’s a lot, you should see how much his purse costs ” I would send the link to Drudge and wait for Instapundit to pick it up, and then watch gleefully as Fox News ran segments about how Barack Obama’s $500 loafers vitiate his entire economic platform. But of course, I’m not a right-wing blogger. And the $520 shoes belong to John McCain. And frankly, I don’t think how much his shoes cost matters one whit for how he’d govern the country.