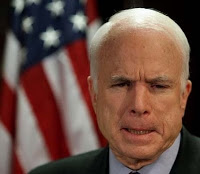 John McCain has softened his stance on gay adoption. Via his Director of Communications, Jill Hazelbaker:

McCain’s expressed his personal preference for children to be raised by a mother and a father wherever possible. However, as an adoptive father himself, McCain believes children deserve loving and caring home environments, and he recognizes that there are many abandoned children who have yet to find homes. McCain believes that in those situations that caring parental figures are better for the child than the alternative.”

John McCain, however, is cool with states banning adoptions by same-sex couples, even if it means that many abandoned children will never find homes or caring parental figures to look after them. Oh, and speaking of abandoned children: McCain divorced his first wife in 1980 when their daughter, the youngest of their three children, was just 14 years old. So John McCain—who personally prefers for children to be raised by a mother and a father—abandoned three of his own children, depriving them of the kind of mother-and-father home that he believes children deserve. Except, you know, his own.