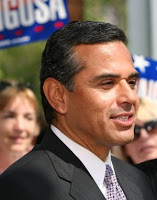 Los Angeles Mayor Antonio Villaraigosa abruptly pulled out of his planned keynote speaker role at Saturday’s Human Rights Campaign gala in San Francisco. Some local gay rights leaders and activists had called for a boycott of the gala in protest of last year’s ENDA/transgender debacle. When the San Francisco Labor Council joined the protest, that put Villaraigosa in the uncomfortable position of having to cross a union picket line, which he decided not to do.

Matt Szabo, Villaraigosa’s spokesman, said the mayor’s decision was more a byproduct of the Human Rights Campaign controversy than a snub of the group itself.

When Villaraigosa agreed to appear at the dinner at the Westin St. Francis Hotel, he was unaware that the San Francisco Labor Council had urged its members to boycott the event, which would have put the Democratic mayor, who is mentioned as a possible 2010 gubernatorial candidate, in the position of having to cross a union picket line, according to Szabo.

“We made a commitment and we understood the controversy, but we are now aware the Labor Council had voted for an official boycott,” he said. Szabo added that Villaraigosa searched for a way to be able to fulfill the obligation before alerting the Human Rights Campaign late Friday night that he was canceling his appearance.

Villaraigosa issued this statement: “As Mayor of the largest city in California, I am committed to creating a world in which no member or group in society is denied full and equal rights. It is my hope that this time next year will find us all united by victory in the fight against Proposition 8 and ever more determined to establish equal rights, with no exceptions, for every one of us.”