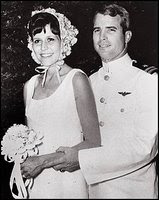 Today Michelangelo Signorile blasts the hypocrisy of John McCain’s stance on gay marriage, pointing out yesterday’s Los Angeles Times story which discusses the fact that McCain got engaged to his present wife Cindy while still legally married to his first wife, who had just been in a devastating car accident.

In fact, McCain got his marriage license with Cindy several weeks before his divorce had been finalized. Yesterday McCain repeated his opposition to gay marriage but added that he also “doesn’t believe in gay adoption.”

Some of the callers to Signorile’s SiriusFM show argued that McCain’s marriage history is old news and shouldn’t be discussed. Signorile disagrees:

1) For a man who is pushing an amendment in California to uphold the “sanctity” of marriage — and cut gays and lesbians out of it — I think it certainly is relevant to look at how he has treated this institution himself, personally and legally. This, for me, is the number one reason why this story is enormously important. It cuts to the core of his own claims on marriage;

2) McCain appears to have lied about when he finalized his divorce and whether or not he was living with his first while dating the second one, and that surely raises questions about what else he might be lying about in his past, and certainly a lie of any kind by a presidential candidate is news;

3) How horrendous McCain treated his first wife does reflect one his character, something that once again is front and center in an election; it also brings us back to recent times and his coziness with a female lobbyist, and, as The New York Times reported (and was attack by Republicans for), the speculation among some on his staff that he was having an affair with the lobbyist. Cindy McCain defended her husband publicly, and said her husband wouldn’t be involved with another woman while married. And yet, as the LA Times story reveals, Cindy McCain was dating him while he was still married and was still living with his wife even though McCain has tried to cover up that fact;