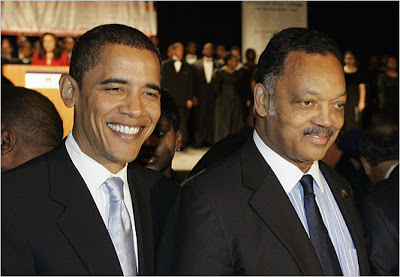 Rev. Jesse Jackson, who has campaigned against the usage of the N-word by rappers and the film industry, apparently used the word himself in that now-famous whispered conversation caught by Fox News.

The Rev. Jesse Jackson used the N-word during a break in a TV interview where he criticized presidential candidate Barack Obama, Fox News confirmed Wednesday. The longtime civil rights leader already came under fire this month for crude off-air comments he made against Obama in what he thought was a private conversation during a taping of a “Fox & Friends” news show.

In additional comments from that same conversation, first reported by TVNewser, Jackson is reported to have said Obama was “talking down to black people,” and referred to blacks with the N-word when he said Obama was telling them “how to behave.”

Though a Fox spokesman confirmed the TVNewer’s account to The Associated Press, the network declined to release the full transcript of the July 6 show and did not air the comments. Jackson – who is traveling in Spain – apologized in a statement Wednesday for “hurtful words” but didn’t offer specifics.

“I am deeply saddened and distressed by the pain and sorrow that I have caused as a result of my hurtful words. I apologize again to Senator Barack Obama, Michelle Obama, their children as well as to the American public,” Jackson said in a written statement. “There really is no justification for my comments and I hope that the Obama family and the American public will forgive me. I also pray that we, as a nation, can move on to address the real issues that affect the American people.”

You may recall Jackson criticizing Seinfeld’s Michael Richards when Richards was caught using the word during a stand-up performance.