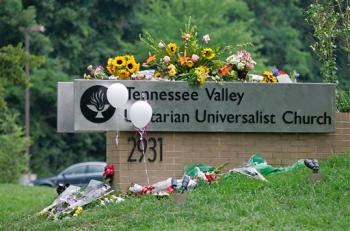 Police won’t release the contents of the letter left by the Knoxville church shooter and the local gay church wants to know what it says.

The man who ministers to East Tennessee’s largest gay and lesbian congregation says his church won’t rest easy until members know what Jim David Adkisson wrote. “The more clarity, the better,” said the Rev. Bob Galloway, pastor of the Metropolitan Community Church in West Knoxville. “We need to know what we’re dealing with. Is it just liberals he was targeting? Is it just gays? Was it all these things mixed together? We need to know.” Galloway said his church serves about 180 people from around East Tennessee, about 85 percent of them gay or lesbian. Some of his parishioners turned around on the way to church and went home Sunday morning when they heard a man had shot up a liberal, gay-friendly church on the west side of town. “They thought it was us,” Galloway said.

The Knoxville police chief says, “If you needed to know, you would have been notified.” I have a feeling that the local DA may not want to taint the jury pool with the contents of the letter. That, or they don’t want to provide the “liberal media” with some major talking points.