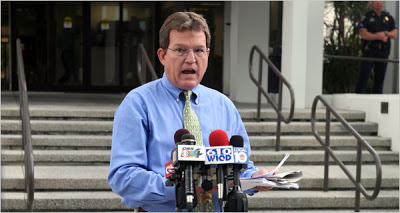 Fort Lauderdale Mayor Jim Naugle once again hammered the straw man issue of dirty, restroom trolling queers yesterday at the same time that he allowed that a “responsible homosexual” could be mayor of the city. Naugle will be term-limited out of office next year and two openly gay men have announced their mayoral candidacies.

Many in Fort Lauderdale’s gay community are upset again at Mayor Naugle, after a radio interview he did Thursday morning. Discussing the fact that two gay men are vying for his job, he’s stepping down because of term limits. Naugle’s legacy leaving city hall may end up being that he was the “anti-gay” mayor—an accusation he denies.

Cleaning up Fort Lauderdale’s parks–that’s what Mayor Naugle says has been his focus in the last several months. He prides himself on shutting down what he says was illegal homosexual activity at Holiday Park. “We had serious problems last year at this park and you can see how great it is here tonight,” said Naugle.

Some accuse Naugle of using a few arrests to give a black eye to the gay community. Gay activists are even more upset now, after Naugle appeared on the WFTL morning radio show discussing whether Ft. Lauderdale is ready for a gay mayor.

“He needs to be responsible with the words he says- he is totally irresponsible and shameless in the comments,” said mayoral candidate Dean Trantalis. Former city commissioner Trantalis is gay and is running for the mayor’s job. He says the mayor is anti-gay and uses that issue to distract from the city’s real problems. “Why does he keep bringing it up? He keeps bringing it up because it grabs the headlines,” said Trantalis. “The Mayor has some serious problems with sexual orientation and enough is enough.”

“A lot of people think because of political correctness they can’t speak the truth,” said Naugle.

Naugle is widely loved by local wingnuts and is expected to seek higher office after his mayoral term expires.