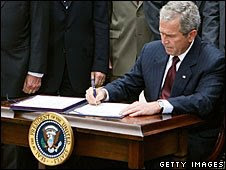 Yesterday Dubya signed away another piece of democracy when he gleefully scratched his name in blood onto the FISA bill.

George W. Bush Thursday signed a law expanding legal authority for wiretaps by spy agencies which he hailed as vital for America’s security, after a fierce Congress battle. “This law will play a critical role in helping to prevent another attack on our soil,” Bush said as he signed the bill, calling it “vital to the security of our people.”

“The bill will allow our intelligence professionals to quickly and effectively monitor the communications of terrorists abroad while respecting the liberties of Americans here at home,” he said. The law includes retroactive immunity for telecommunications firms which aided warrantless government surveillance operations following the September 11 attacks in 2001, meeting a key White House demand.

The ACLU responded with an immediate lawsuit.

“Spying on Americans without warrants or judicial approval is an abuse of government power – and that’s exactly what this law allows. The ACLU will not sit by and let this evisceration of the Fourth Amendment go unchallenged,” said ACLU Executive Director Anthony D. Romero. “Electronic surveillance must be conducted in a constitutional manner that affords the greatest possible protection for individual privacy and free speech rights. The new wiretapping law fails to provide fundamental safeguards that the Constitution unambiguously requires.”

In today’s legal challenge, the ACLU argues that the new spying law violates Americans’ rights to free speech and privacy under the First and Fourth Amendments to the Constitution. The new law permits the government to conduct intrusive surveillance without ever telling a court who it intends to spy on, what phone lines and email addresses it intends to monitor, where its surveillance targets are located, why it’s conducting the surveillance or whether it suspects any party to the communication of wrongdoing. Previous Broadway Friday
Next SC Says “No” To Gay Tourism