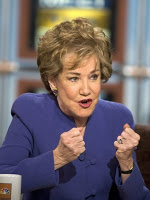 Elizabeth Dole Says “Fuck You” To Americans Who Died From AIDS This is unbelievable. Sen. Elizabeth Dole (R-NC) wants to rename the the current AIDS relief bill after Jesse Helms.

SA 5074. Mrs. DOLE submitted an amendment intended to be proposed by her to the bill S. 2731, to authorize appropriations for fiscal years 2009 through 2013 to provide assistance to foreign countries to combat HIV/AIDS, tuberculosis, malaria, and for other purposes; which was ordered to lie on the table; as follows: On page 1, line 5, strike “and Henry J. Hyde” and insert “, Henry J. Hyde, and Jesse Helms”.

Jesse Helms, the man who in 1987 described AIDS prevention literature as “so obscene, so revolting, I may throw up.”

Jesse Helms, the man who in 1988 vigorously opposed the Kennedy-Hatch AIDS research bill, saying, “There is not one single case of AIDS in this country that cannot be traced in origin to sodomy.”

Jesse Helms, the man who in 1995 said (in opposition to refunding the Ryan White Act) that the government should spend less on people with AIDS because they got sick due to their “deliberate, disgusting, revolting conduct.”

Jesse Helms, the man who in 2002 announced that he’d changed his mind about AIDS funding for Africa, but not for American gays, because homosexuality “is the primary cause of the doubling and redoubling of AIDS cases in the United States.”

Many people hold Ronald Reagan responsible for adding to the early AIDS death toll by his inaction on the pandemic, but it was Helms’ actions in thwarting early research that inarguably hastened the demise of many thousands of Americans. How many of my friends, of your friends, would be alive today if the life-saving medications had arrived just one fucking year earlier?

Fuck YOU, Senator Dole. Fuck you with something hard and sandpapery.